Posthumous Awards  The actions of those who lose their lives in going to the rescue of others are recognised by the award of the Posthumous Medal.

Major Awards The following awards may be awarded annually: 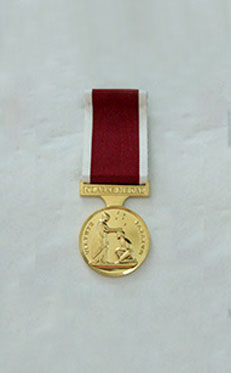 The Clarke Medal Instituted in July 1881 by the Honourable Sir William Clarke Bt MLC, is awarded to the most oustanding case(s) of bravery considered during the year. It consists of a special bar to the medal of standard design with its own ribbon and is either of gold silver or antique silver, according to which class of award has already been decided by the Court for the rescuer(s). More than one Clarke Medal can be awarded annually where the Court is unable to differentiate between the merits of two or more cases involved in the same rescue and which have earned the Gold,Silver or Posthumous Medal during the year. The Clarke Medal need not be awarded if there is no case of sufficient merit. The Clarke Medal can be awarded posthumoustly.

Stanhope Gold Medal The Stanhope Gold Medal is an award of The Royal Humane Society. It was instituted in 1873 as the English Society's highest award for the most meritorious case of gallantry considered during the year. It was decided in 1962 to invite all kindred Commonwealth Societies to nominate their best cases for consideration for this important award.

The four classes of medals and the Clarke Medal have the same design. The female figure on the obverse represents Australasia in the act of placing a wreath on the head of one whose courage and humanity have been judged worthy of such honour and includes the Southern Cross. The motto "Virtute Paratum" translates as "Bravery Rewarded". The wreath on the reverse is of laurel and eucalyptus leaves.

Wearing of Medals and Ribbons Recipients of the Societies medals are entitled to wear the medal or ribbon (as appropriate) on the RIGHT BREAST. This is also officially authorised for members of the uniformed services, both combatant and civil.

Insignia As evidence of their bravery award, award recipients are entitled and encouraged to wear in the right lapel
in everyday dress the award insignia, a metal miniaturization of the society medal ribbon.

Clasp to Medal If a person is awarded the same medal award more than once, a clasp for such award is presented.

Corporate Awards Awards are made only to individuals, not to organisations or groups. 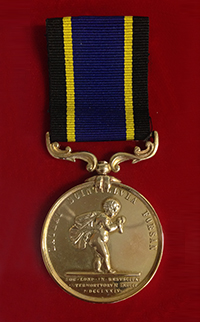 Operations of the Society

Court of Directors The members, whose services are voluntary, meet monthly, usually on the last Monday of the month, to consider and decide on applications for awards.

All members of the community, individuals and/or organisations are invited to submit applications for awards. Eye-witness statements should be included to help substantiate nominations.

Applications from interstate are channelled through the offices of the Society's state representatives, the Honorary Correspondents listed in "associations". In recent years, shires and municipalities within Victoria have offered to act as agents for reporting acts of bravery to the Society.

Essential criterion For a case to be deemed worthy of an award the rescuer must risk his/her life to save or attempt to save the lives of others. To substantiate the facts of an accident, statements from eye-witnesses, duly attested, are required.

Time Limit Award applications should be submitted as soon as possible following the incident. Applications submitted after twelve months from the date of occurrence will not be considered unless supporting evidence is satisfactorily recorded within that period or unless circumstances beyond the reasonable control of the applicant cause more than twelve months' delay.

In making awards, the Court of Directors takes account of the expertise of the relevant advisory committees an the relationship, if any, between the rescuer and rescued. Where applications on behalf of members of emergency services (police, fire etc) are received, awards will be made only if the circumstances of the incident are judged to be over and above the call of duty.

The decision on the class of award is a judgement by each director of the degree of risk involved.

Awards are presented annually in each state or territory at ceremonies conducted at Government House in each capital city through the graciousness of the Patrons of the Society.

The Clarke Medal or Stanhope Gold Medal is usually presented at a separate ceremony by the Senior Patron of the Society, the Governor-General. On occasions when the Queen has been visiting Australia, Her Majesty has honoured the Society by presenting the Clarke Medal and Rupert Wilks Trophy on four occasions. 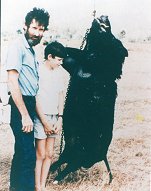 Alfred and his father with a boar similar to the one which attacked Mr Collins and which Alfred beat off. 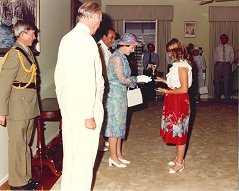 The Queen presents the Clarke Gold Medal and Rupert Wilks Trophy to Peta-Lynn Mann at Government House, Daclickrwin. Peta-Lynn won her awards for rescuing a man from a crocodile attack.

Wearing of Your Award

Awards are presented in a presentation case, consisting of a medal, a miniature medal, a ribbon bar and your insignia. All, by tradition, are worn on the RIGHT breast.

To assist you in wearing these items we advise the following:

1. The Medal. You are entitled to wear this on occasions when the wearing of medals and decorations is appropriate and/or requested.

2. The Miniature Medal. This is usually worn on social occasions as requested with business suit or dinner suit and usually in the evening.

4. Insignia. May be worn at any time with civilian attire to signify that you are the recipient of a Society award. We encourage you to wear your insignia all the time on the RIGHT lapel of your jacket.

We hope that you take pride in wearing these emblems of your award.