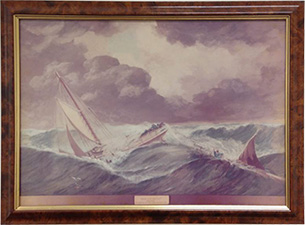 Dismasting of the Pilot Schooner "Rip"

Dismasting of the Pilot Schooner "Rip"

"It was about half past nine o'clock on Tuesday, 15th July, 1873, when we slipped the moorings. Mr Pilot Best was in charge, Messrs Reed, O'Neil, Caught and McKenzie, Pilots, were also on board and eight all-told crew.

We set our trysails and proceeded towards the Rip. It was blowing a gale from S.W. at the time. Mr Best thought that there was too much tide at the time to go out, so we waited until 11 o'clock, when the tide eased a little. We then received orders to go out.

Heavy seas were breaking on board all the time. We were standing to the south-wards, we stood on until the Low Light was on with Point Nepean, and then gave the orders to let draw and wear ship. Immediately we had done so she was struck by a heavy sea which threw her on her beam ends and carried away the mainmast.

Able Seaman James Marr was washed overboard with it. Then a big sea broke on board and carried Mr McKenzie and Able Seaman Wells and Classon overboard. Wells had been injured just before, I suppose by the splinters. The flesh was torn from the hips to the knee. He would I think have bled to death. He told me he was getting weak. I was ordered aft to steer.

The young flood made and was taking us on shore. We cleared the Corsair Rock within fifty feet. We then put the helm up and ran before some fearfully heavy seas. I never saw a heavier sea before in my life. It seemed like a large building coming right down on us.

We were outside the Rip when the accident took place and fully two miles off shore. Pilot McKenzie was very cool, and so was Marr who was on the mainmast. He motioned to cut it adrift so as to save the vessel, although he knew by doing so he could not be saved. We bade him good-bye and he nodded to us."

Origins of the Society

The formation of this society was first publicity suggested in a letter written by Mr John Wilks, referring to the loss of life and selfless heroism displayed at the wreck of the Pilot Schooner "Rip", and published in the "Argus" 24 July 1873, under the nom de plume "Nero".

Preliminary meetings having been held at the instance of the Hon. George S. Coppin, M.L.C, the Society was formally inaugurated as the Victorian Humane Society at a public meeting in the Town Hall, Melbourne, presided over by the Right Worshipful the Mayor, Alderman J. McIllwraith, on 28 September 1874, just one hundred years after the foundation of the Royal Humane Society in England.

In 1878, in response to several applications, the directors decided to extend the Society's operations, after which date the awards of the Society were so frequently applied for and so much appreciated throughout Australasia, that the directors judged that it would be more appropriate if the title of the Society were altered. Accordingly, in the year 1882, the directors obtained through His Excellency the Marquis of Normanby, the then Governor of Victoria, the consent of Her Majesty the Queen to assume the title of "The Royal Humane Society of Australasia".

With the view to making the Society federal in character, as well as in name, the directors in the following year sought and obtained the patronage and co-operation of the other governors and governments and in the year 1886 the Society was completely federated throughout the whole of Australasia and Fiji, thereby becoming the first federal institution in Australia.

Since its inception, the Society has taken pride in being non-political and non-sectarian and in having the support of all governments, federal and state of whatever political creed.

A history of the Society from 1874 to 1994 "7000 Brave Australians", with commentary on the Society's development and listing all recipients, recipients of letters of commendations, office bearers and giving details of the more noteworthy rescues is available from the Society Office at a cost of $66.00 (incl GST & postage).